Yes, folks, It's that time of the year - the short window of opportunity in Sydney to brew lagers and pilsners.  So I've stocked up on supplies, and I'm ready to rumble! Or brew. Whatever.

First off the block is ESB's Bohemian Pilsner Finest Round Wort Kit.  I'm highly sceptical of salesmen, but apparently I have a soft spot for beer.  Who knew? 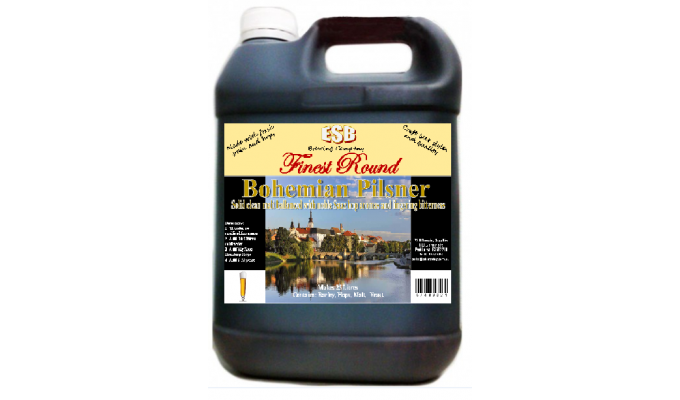 It comes with saflager yeast and a small amount of Saaz finishing hops, which is consistent with my "year of hops", which has so far worked well.  So far I've used cascade hops, crystal hops and hallertau (not to be confused with Dene Halatau from the awesome Wests Tigers) hops.  My favourite hops has proved to be crystal hops, which has a very nice citrus aroma and strong but not overpowering taste.  Cascade was a bit over the top for my liking, while hallertau was so subtle i was unable to notice it.  But just to be sure, I have one in the fridge for (yet another) taste test.

I also bought a Mangrove Jack's Dutch Lager kit, with some fancy yeast and hops to flatter it.  I'm salivating at the though of drinking a beer with genuine Oktoberfest liquid yeast.  Wunderbar!!!  I also bought a bock liquid yeast for the next time I do a dark beer.  Like a kid in a lolly store, I also bought more crystal hops and Summer hops, which is an Australian breed with fruity overtones.

So once I've cleaned the fermenter, It's pilsner time!  Next will be the dutch lager using Oktoberfest yeast and summer hops, followed by probably a Coopers Dark Ale with bock yeast and a little bit of crystal hops.

Bottoms up!
Posted by The Beer Whisperer at 8:31 PM