As part of a Father's Day present to myself, I indulged in a Black Rock coriander & orange Witbier, in the style of the classic Hoegaarden Witbier. What could possibly go wrong? 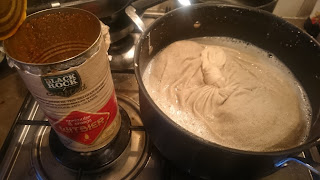 To add to the authenticity of the beer, i decided to to do a partial mash, adding grain to the brew to add freshness and flavour. Unfortunately, I could not find the cooking thermometer, so I was forced to use the traditional gauge - the finger. If it hurts - it's too hot!

Anyway, i dragged out an old liquid hefeweisen yeast that i'd used, however it appeared to have little yeast, so I added Oktoberfest liquid yeast to ensure fermentation, setting them in a glass with fresh malt and a favourable temperature to procreate, to be ready for addition to this to-be exotic brew.

I realised why I hadn't done a partial mash in a long time, having to steep the grain at 65C for 30 minutes, and then spend the next hour squeezing out malt for the tiniest of results. At least i'll appreciate the effort, if not fellow imbibers, not that i'd fail to remind them of the inordinate effort involved in creating such an assumed fine brew.


After spending the afternoon perfecting my concoction, I overfilled the fermenter to 26 litres instead of the usual 23, so I'll need to keep an eye on it to ensure it doesn't overflow from the airlock like many of its predecessors. Fortunately I recently took the next step in home brewing by acquiring a fridge with a separate thermostat, ensuring that such nasty happenstances don't flood the garage. The end result was a final gravity of 1038 - an expected alcohol by volume amount of 4.3%. Yes, it's a bit of a pink handbag of a beer, but I can always drink more to compensate.

As to what could possibly go wrong? Well, we'll just have to wait and see...

Posted by The Beer Whisperer at 6:39 AM