Well, folks, with all these fancy-like foreign beers, a few gems not only exist at home, but have been quietly hiding in plain sight.

Sheaf Stout, originally brewed by Tooth's Brewery in Sydney, "builds stamina"!! "Keeps you fit"!! according to the famous pub paintings of the mid-20th century. 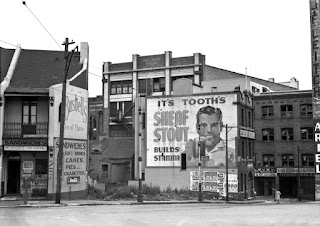 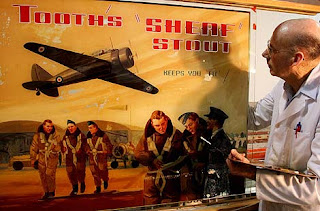 Born some time after 1835 when Tooth's originally formed (no accounts of when Sheaf Stout first graced the pubs of Sydney, unfortunately), Sheaf Stout survives to this day, today's beer tasting coming courtesy of 1st Choice Liquor.

So, how's it taste? Well, according to Carlton United Breweries, who bought Tooth's, Sheaf Stout is a "classic Australian stout with a tantalising dry finish and a medium body". Tantalising, eh? Dry? Ooooh! According to one plonker punter at www.ratebeer.com, Sheaf Stout has "hints of coffee grounds, roasted malt, and toasted bread". Roasted malt? In beer?! Who knew? What about "light dark malts"? Is that like dry rain? Hot ice? Cold fire? Why did I bother checking reviews? So here's mine...

Sheaf Stout is a full-bodied stout with a mild burnt taste, full of flavour and finely balanced between bitterness and sweetness, but oozing smooth creaminess which lasts throughout. It's an honest, true Aussie beer which apparently has not suffered at the hands of "commercial imperative". No, Sheaf Stout is a great Australian beer, hanging on like a flea on a dog's arse in a gale on the back of a ute in the midst of a craft beer assault on tried and proven beers.  Fortunately, most Australian craft beers default to Pale Ales, which is code for "buggered if I'd know, let's call it a Pale Ale!!!"

Like how Tooheys Old keeps winning awards, Sheaf Stout stumbles on, despite having credibility that most modern ales never find. Surely, Sheaf Stout qualifies as a great Australian Ale, while most craft wannabeers (see what I did there?) can only dream of making lists of great Australian beers. To be fair, though, Sheaf Stout requires a taste test against greater, nobler beers, however I suspect that it will hold up well against more famous stouts.

Look forward to a stout-off on Beery's blog between Sheaf Stout and the likes of the great Guiness and others! Beer on!!!
Posted by The Beer Whisperer at 5:40 AM No comments:

When coffee is not enough... 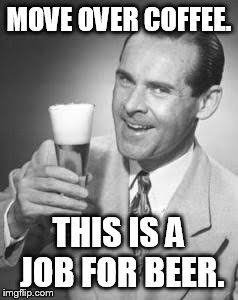 Posted by The Beer Whisperer at 2:39 PM No comments:

Spring is the season for brewing, and The Beer Whisperer has been BUSY!!!

This weekend's effort was the brewing of ESB's 3kg Porter with Safale S-04 yeast. No extra effort from me, except 200g extra dextrose just in case alcoholic content is insufficient (you can never be too sure).

Original gravity is 1040, at 23.5 litres, so perhaps will end up around 4.5%, however the big news at the blog is the planned LIVE STREAMING TASTE TEST of Black Rock Crafted Witbier!

Yes, folks, The Beer Whisperer blog is planning a live streaming via Youtube taste test to compare Black Rock Crafted Witbier against both Hoegaarden Witbier and White Rabbit Pale Ale. I suspect my brew is much closer to White Rabbit Pale Ale, however ONLY A TASTE TEST WILL REVEAL THE ANSWER!

So folks, I am considering candidates for the live taste test, so please submit your requests here!!

After my first IPA failure, I am attempting to fulfill my quest to make amends to the beer gods by producing an India Pale Ale better than I have ever produced. No biggie, you say, but my IPAs have been the most consistently good beers I have ever made. I admittedly went overboard on the alcohol on my last IPA attempt, rounding out at about 7% alcohol by volume. This time I have gone for around the 5.5% mark, still strong enough to call itself an IPA, but with enough margin of error to be less likely to fail.

But before I get down to the grisly details, what exactly is an IPA?? I'm glad you asked, even if you didn't.

According to the Craft Beer Academy, the India Pale Ale was invented by the British to preserve beer for the long trip from England to India. Five months in a hot boat tends to make beer a bit ordinary, so what to do about this crime against humanity?? Make it more alcoholic, of course! And that's what I'd do, but just because more alcohol. Oh, and hops. Lots of hops. 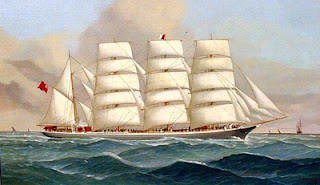 So what did I do this time around to appease the beer gods for my beer sins? (no, no, not the James Bond Party incident. That was da evil cocktails. Beer was innocent, I tells ya!). 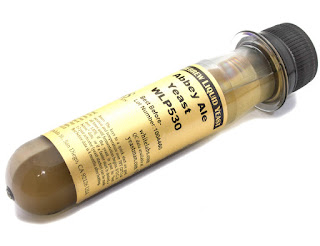 It's not your typical yeast for an IPA, but as a high gravity Belgian yeast, it is ideal for stronger ales, and the serious awesomeness of this yeast promises to make this a beer to remember! And to top it off, unlike last time, I now have a beer fridge with thermostat to control the temperature to a constant degree. With an original gravity of 1050, assuming a final gravity of 1010, this beer should bottle at around 5.6%, be quite malty, and with a fine robust yeast to top it off.

Cheers!
Posted by The Beer Whisperer at 2:40 AM No comments: